How the Women’s Union Began 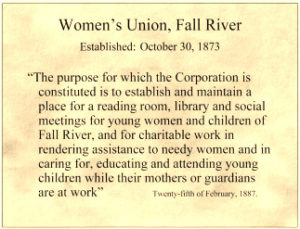 On October 30, 1873  a group of civic minded women met to consider ideas to benefit the women and girls of Fall River. The first business meeting was held on December 15, 1873. The members voted to procure a room where women and girls could gather for “enjoyment and assistance”.  Mr. Thomas J. Borden volunteered room #18 in the Troy Manufacturing Building.  On February 25, 1889, the Women’s Union was incorporated.

One of the first projects was a sewing school which continued for many years. The Women’s Union members discovered they needed more space. In 1883 the Union Manufacturing Company offered some rooms in their office building. The women were able to expand their services for women and girls.

Throughout the 1880’s, literary assistance, technical skills training and recreational activities were  offered to young working girls.  Access to educational materials and various social programs at work sites assisted women and children in their struggle against a biased school system and industrial authorities. In 1896, the Women’s Union rented a house on Pine Street in Fall River, MA.  This house offered women and girls a place to live  at a reasonable cost.  At the same time, the Women’s Industrial Exchange was opened.  As many women were unable to leave their homes for a job, the exchange enabled them to sell their homemade items.  This gave them a sense of accomplishment by contributing financially to savings for themselves and their family.The Women’s Union realized that they needed more space for their activities. In 1904, they began a fundraising project.

By 1909, the women were ready. The Women’s Union  building on Rock Street was dedicated debt free. Here, they offered education classes, cultural programs, and thirty-two residential rooms for working women. A restaurant and exchange for women to sell their own crafts were located on the first floor.  Personal networks and positive experiences shared at the Women’s Union provided a sense of solidarity and empowerment amongst working girls and Board members. 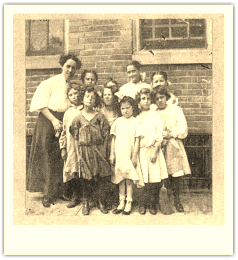 The Fall River Women’s Union has sustained its position as a  social service organization for over a century, remaining true to its mission of helping better the lives of women and children.

The Fall River Women’s Union held their first business meeting on December 15, 1873. The catalyst for this meeting was a lecture delivered on October 30,1873 by Miss Jennie Collins, a Boston social worker active in Boffin’s Bower. 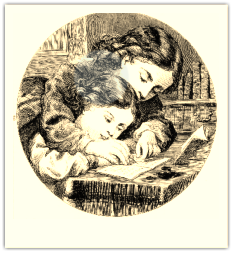 The first meeting found the ladies in Room 18 of the Troy Building; planning enrichment and education for the working women of Fall River and their daughters.  The goals to provide a place where women would find assistance, advice, amusement and support were mapped out.

The officers elected were: